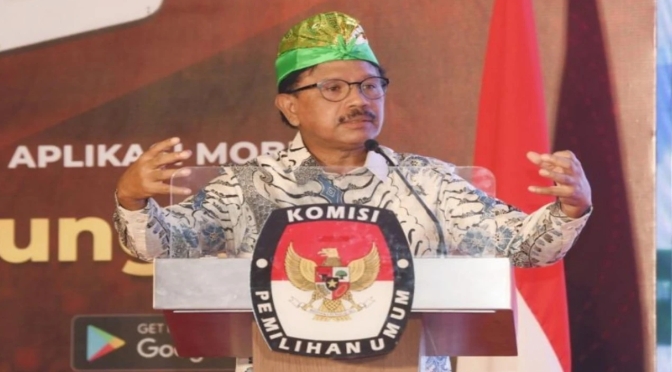 The Minister of Communication and Informatics, Johnny G. Plate, acknowledged that the 2024 General Election (Election) was a momentous opportunity to produce Indonesia’s future leaders with a commitment to digitising Indonesia. According to the Minister of Communication and Informatics, digitalisation in elections is very possible because many countries have started implementing e-voting.

The adoption of digital technology in election activities has the benefit of realising effectiveness and efficiency in the legitimate political contestation process, both at the voter stage, voter identity verification, voting, vote counting to transmission and tabulation of election results.

Through free, fair and secure online voting, as well as through an e-vote system or internet voting. Estonia has been doing it since 2005 and it has a digital electoral system at the city, state and EU level which is used by 46.7% of the population. So it’s not new, including the KPU, it has been preparing for a long time.

Citing data from the International Institute for Democracy and Electoral Assistance, Minister Johnny stated that the stages of electronic voting or e-Voting have been used in 34 countries in the world, carried out in various forms and levels. The implementation of e-Voting involves election management bodies or electoral management boards at the national and sub-national scales, such as the election of members of the regional legislature.

The important thing to pay attention to is not only the digital process. However, it is more about the community’s readiness to maintain the level of trust in every stage of the election, including during data verification and re-verification.

Digital transformation at the global level affects various human activities. Therefore, the digitisation of elections is a necessity as part of the practice of democracy and the manifestation of the sovereignty of the Indonesian people. However, the Minister of Communication and Informatics assesses the trend of digitisation and even now the era of the cyber election has emerged which is marked by several characteristics.

First is the existence of digital innovation as part of the solution. Second, data flow and communication. Third, regarding the characteristics of the acceleration of the rate of communication. Fourth, is the commodification of electoral data. Regarding digital innovation, technically the government’s efforts to accelerate ICT infrastructure development are expected to facilitate digitisation. One of the biggest challenges has to do with legitimacy. Therefore, there have to be joint efforts to convince the public that the legitimacy of digital elections could be accepted.

In order to realise digital transformation in the election process, the existence of digital infrastructure is important to be developed optimally. With adequate ICT infrastructure, digital elections will be able to be held. That is the most effective way and means to fill people’s migration from physical space to digital space.

As reported by OpenGov Asia, the Government of the Republic of Indonesia is building cooperation in the digital sector to support the acceleration of national digital transformation. The Minister of Communication and Informatics, Johnny G. Plate,  is looking to create opportunities to develop partnerships to implement the latest technologies across the nation.

Minister Johnny G. Plate discussed “Strategies for Energising the Data Economy” and spoke about increasing the volume of global data, the urgency of the Green Data Center and the importance of Cross Border Data Flow and Data Free-Flow With Trust – all of which are priority issues of the Digital Economy Working Group (DEWG) under the leadership of the Ministry of Communication and Informatics in the G20 Indonesia Presidency.