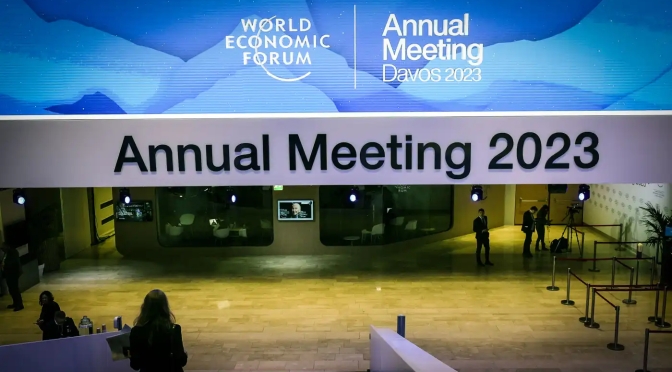 DAVOS, Switzerland — The annual meeting of the World Economic Forum that concluded on Friday was notable in the growing presence of Asian players.

The five-day session was held in-person in its traditional January slot for the first time in three years, bringing thousands of public and private-sector leaders to this small Swiss town.

In this typically Eurocentric gathering that touched on a wide-ranging topics from the war in Ukraine, supply chains to gender inequality, Asian business leaders offered deep insights into various issues.

Who was more visible, China, India or ASEAN?

The profile of Asian participants in the annual meeting has been rising the past few years. India seems to be the most visible among regional peers, with major tech companies staging booths and a large billboard of Prime Minister Narendra Modi displayed on the city’s Promenade. Indian business leaders were at the forefront of debates over technology and supply chain issues.

Raghuram Rajan, a University of Chicago finance professor and former Indian central bank chief, mentioned this shift in the context of how IT service sector companies, like Infosys, are broadening their global reach.

“You’re seeing a fairly strong push up in the service exports at this point, and it could do far more. You see at Davos a lot of Indian firms are trying to expand their reach,” Rajan said.

While Association of Southeast Asian Nations members, such as Indonesia and the Philippines, sent large delegations as well, China’s visibility has ostensibly dropped, at least compared with three years ago. A veteran Davos participant attributed this to a “calendar factor,” as the conference was held a week before Lunar New Year, and not to a decline in China’s standing.

Can technology save the world?

While leaders in Davos kept trying to find clues to solving global problems such as climate change, the energy crisis, and inclusive growth, executives of tech giants boasted that many of their innovations could offer solutions.

Arvind Krishna, chief executive of IBM, said the company’s quantum computer would provide the ability to solve problems in areas such as materials science as soon as this year. He pointed out that this could lead to the development of a new fertilizer that would help food shortages and accelerate the innovation of electric vehicle batteries.

Amid concerns over a global economic slowdown, even tech giants are not immune to layoffs. Microsoft CEO Satya Nadella argued that digital technology, like artificial intelligence, “can help boost” the overall economy by increasing productivity in many industries.

Sunil Bharti Mittal, chairman of the Indian group Bharti Enterprises, said the spread of faster 5G communication technology would help emerging economies receive the same services as developed ones. The chairman added that with this, “millions” of people will be able to attend events such as the Davos conference — which has been often been called a gathering of the world’s elites.

‘Re-globalization’ of the supply chain

Will the end of globalization of international politics and the world economy continue, or is this the beginning of “re-globalization?” This was one of the hottest topics discussed in Davos this year. And the global semiconductor industry, which has been hit hard by a supply chain crisis caused by the pandemic, is leaning toward re-globalization.

At a session, Intel CEO Pat Gelsinger stressed that the American chipmaker is “fixing” the high concentration of high-end semiconductor production in Taiwan by adding new factories in the U.S.

“We had allowed ourselves to become acutely dependent on single points of failure in the supply chain,” Gelsinger said, adding the industry needs a “balanced, resilient supply chain.”

Ashwini Vaishnaw, India’s minister for railways, communications, electronics and information technology, who was on stage with Gelsinger, said the importance of India as a global tech manufacturing base is increasing as the tech rivalry between Washington and Beijing deepens.

“This is made in India,” the minister said, showing off the latest iPhone. He added the country would continue to attract the chip manufacturing industry, which is higher in the tech value chain.

Is China rescuing the global economy?

China emerged as a main focus in the debate surrounding global growth. While debates over whether, or how deep, a recession will hit the U.S. and Europe cast a shadow over most outlooks for the future, China’s unexpected U-turn from its stringent zero-COVID policy has provided a sense of optimism to some.

Kristalina Georgieva, managing director of the International Monetary Fund, hinted Friday on upgrading the global growth outlook based on two major factors — the expectation of inflation receding and the “prospect for China to boost growth.”

While similar sentiment was heard during the conference, many expressed skepticism about such optimism.

Kevin Rudd, president and chief executive officer of Asia Society and a former Australian prime minister, expects China “to face a combination of residual domestic headwinds and also the international headwinds,” including strategic rivalries against the U.S.

“If China and the U.S. can keep certain equilibrium, then we should see reasonable growth. If we don’t, then that will also act as an external headwind,” he said.

No top stars from the U.S. and China

According to the organizer, over 50 heads of state or government attended the event in person, a record high. A few of them were from Asia, including South Korean President Yoon Suk-yeol, Philippine President Ferdinand Marcos, Jr. and President Jose Ramos-Horta of Timor-Leste, who were all newly elected last year.

However, no top leaders from China or the U.S. were present. For that matter, German Chancellor Olaf Scholz was the only G-7 leader at the event, while Russian politicians were also absent.

The major headline-grabbing news on U.S. and China occurred elsewhere in Switzerland during the Davos conference. U.S. Treasury Secretary Janet Yellen, who did not attend the WEF event, met Chinese Vice Premier Liu He, who was dispatched to Davos, on Wednesday, where both sides agreed to have had a “candid” discussion. The stage and the spotlight were in Geneva, not Davos.